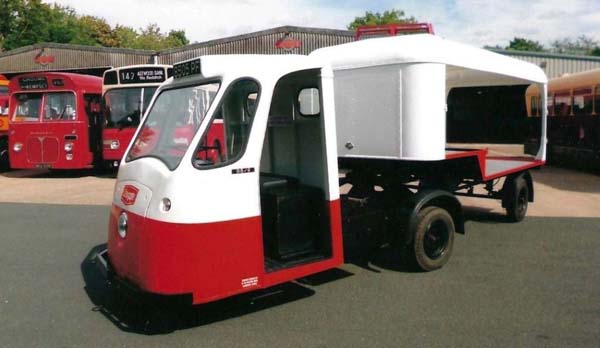 Road-going battery-electric articulated load carriers are very rare and latterly were only offered by Wales & Edwards. Introduced in 1961, by the time that the model was withdrawn from the range in 1966 only eighteen had been built. Fifteen of these were supplied to Unigate Dairies subsidiaries, this one - the ninth constructed - going to the Home Counties Dairy at Crawley.
It was to outlive all of the others by a considerable margin being finally withdrawn from the Eastbourne depot in 1992. By then something of a celebrity, it was donated to us by Unigate who also met the cost of its transport to Wythall.

So far we have been unable to obtain photographs of Unigate Loadmasters in their original condition with open sided trailer. The trailer of 8505 PF carries its orginal underframe but the body was rebuilt to boxvan format by 1985.