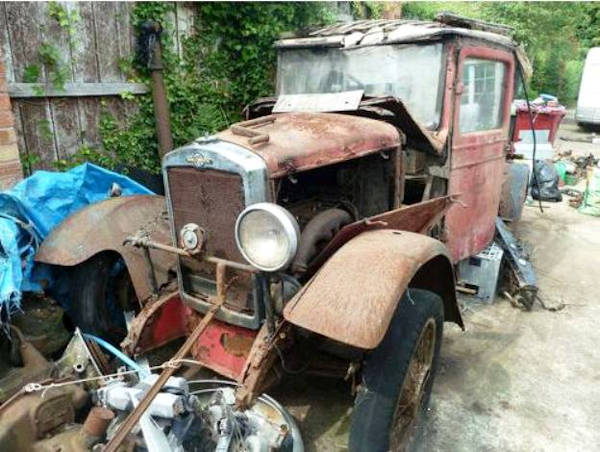 AHA147 is a Morris Commercial L2 14hp 15cwt van - chassis number 416L/3037 - purchased by Midland Red via Colmore Depot, Birmingham, and registered in Smethwick on 30 November 1934. It is believed to be the first three-letter Smethwick registration issued to the company, but only by a matter of days, because the first AHA-registered bus entered service on 8 December that year, and the next few on 12 December.

Its log book records its original livery as grey and red, later altered to red; the latter would have been Sinclair's standard all-red service vehicle livery. The Accounts Department allocated it inventory number M95, but like the 'A' numbers for buses this was not displayed on the vehicle; indeed it is not known if any service vehicles carried a 'bonnet' number prior to the arrival of Sinclair. It is also not known what fleet number was later allocated to AHA147, though it might eventually be discovered beneath several coats of paint.

Its original allocation is not recorded formally, but AHA147 is known to have been at Hinckley Garage by 1947. However, the records we have suggest that service vehicles were rarely transferred between garages, so the speculation is that it went to Hinckley Garage when it opened on New Year's Day 1935 and remained there until being replaced by a Morris Commercial lorry in 1953. If that is the case, then it would have been at Hinckley at the same time as the SOS SON GHA337. AHA147 had its road tax surrendered by Midland Red on 2 March 1953, and its first subsequent owner - a farmer in the Nuneaton area - re-taxed it on 6 March 1953. It remained in use with the farmer until 1960.

Presumably it was then simply left for three-and-a-half decades before being acquired by a commercial vehicle preservationist in 1995. Lloyd Penfold discovered it being offered for sale through e-Bay in July, and a successful bid has secured it for the Museum. Unfortunately, its early registration number seems to have attracted some bidders, which might have pushed the price up. AHA147 is clearly in need of very extensive restoration, and it will be a 'barn find' exhibit until its turn comes. Yet one hopes it should be simpler than rebuilding a bus body, and experience gained from the battery-electric vehicles suggests it will not be an impossible task.