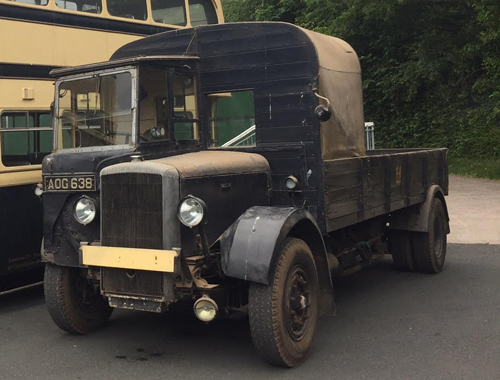 AOG 638 originally looked like our exhibit CVP 207 but was one of several 1934-5 vehicles with bus bodies worn out after World War Two converted by Birmingham City Transport to lorries and vans around 1947.

Lorries like this towed away broken down buses or moved passenger shelters. In the winters, they were also used to spread grit and salt on roads used by buses. Nothing hi-tech, bus drivers and conductors working overtime shovelled the grit off the back of the moving lorries. Hard work!

Some of these lorry conversions had very long lives, AOG 638 surviving long enough to pass with the Birmingham fleet to the West Midlands Passenger Transport Executive in 1969. It was finally sold in 1975 and preserved for many years by the late Colin Hawketts. The museum purchased it in 2017.