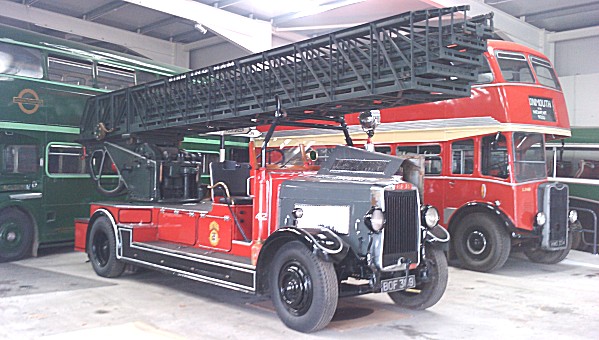 Fire appliances with extending ladders are among the most visually impressive fire rescue vehicles.

Fire engines with wooden escape ladders mounted on fully rotating turntables became commonplace during the 1920s. In the early 1930s, chassis builder Leyland Motors secured the sole UK franchise for German ladder builder Metz and began to market 100 feet (30 metres) all-steel turntable escapes. The turntable ladder was power operated and split into sections (usually four). The Leyland - Metz appliances were supplied to many major fire brigades, including this one for Birmingham. It was delivered in time for the grand opening of the new Central Fire Station on 2 December 1935.

It was converted from petrol to diesel power in 1939. It soon had to work hard during World War Two (1939-45), notably the serious 1940-1 air raids on Coventry and Birmingham. It spent its Birmingham career at the Central Fire Station. In 1955 it was sold to a Lancastrian quarry owner who used the extending ladder to place explosive charges!

BOF 389 at some point passed into preservation. It joined the museum collection in 1988 and has been thoroughly restored.