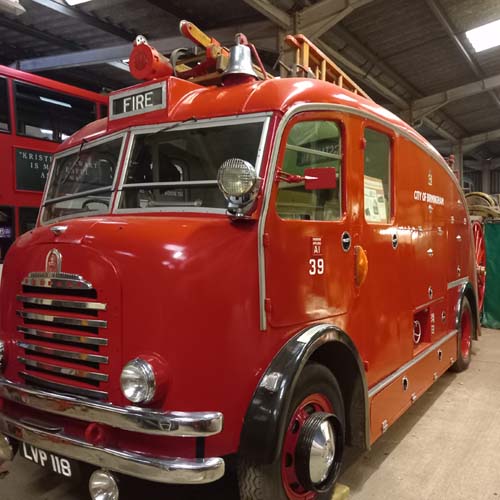 Fire brigades were managed nationally during World War Two but returned to local authorities in 1948. Birmingham Fire Brigade's new fleet after the war contained no less than 27 similar Bedfords like this appliance.

The Bedford chassis is actually a design intended for coaches; the wheelbase was shortened for fire brigade use by Prestage, Bedford's Birmingham agents. The streamlined bodywork was designed by Divisional Officer Jimmy Hole and built by Wilsdon, a builder of commercial vehicle bodies in Solihull. The enclosed cab accommodates six firefighters. The vehicle has a Dennis pump capable of drawing 500 gallons a minute from hydrants, pools and streams through a high pressure hose reel. A 100 gallon water tank can supplement this.

The escape ladder is detachable on this type of fire appliance and manoeuvred manually. It is made of wood, which may seem surprising for attacking fires, but steel would have been too heavy. The ladders were often transferred from one generation of appliances to another; this ladder dates from 1932, mounted on a 1927 cradle.

LVP 118 was originally allocated to Erdington station and ran until 1972.

The Bedford is currently undergoing a complete restoration.

An example of a Bedford 'pump escape' engine, built by Prestage of Birmingham in 1952.