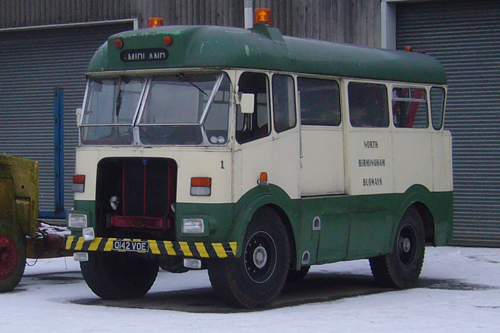 Midland Red bought this World War Two AEC Matador from the War Department in 1947 for use as a recovery vehicle.

The company gave it a new body in 1962 using bus and coach parts. The distinctive windscreen was identical to Midland Red's original motorway coaches, nationally famous at the time. The rebuilt Matador soon became a celebrity vehicle among bus people in the area.

The Matador was based at Birmingham Digbeth garage for many years and, after the old company was split, passed to Midland Red West. It was eventually sold to North Birmingham Busways as their recovery vehicle.

Made redundant when that company was taken over in 2007, it was purchased by Peter Murphy for preservation.