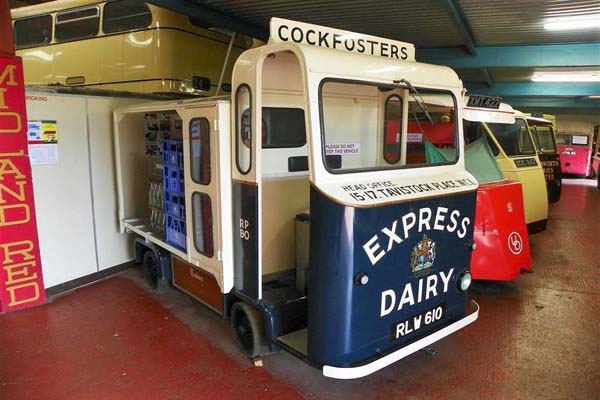 The Express Dairy in London had its own b.e.r.v. manufacturing facility - T.H. Lewis Ltd. - but in 1955 the fleet requirement exceeded the production capability. In that year an order was placed with Ross for 168 complete trucks based on EDs standard milk delivery vehicle, the 'Rider Pram'. The Ross 'copies' carried Helecs Vehicles Ltd. chassis plates and no. RP90 is one of them.

It spent about ten years with Express before being sold to the Bournemouth & Parkstone Co-operative Society. In 1978 it was disposed of to the privately-owned Muscliffe Farm Dairy in Bournemouth. Now something of an antiquity, it was saved for posterity by a local gentleman in 1983 who donated it to the Trust five years later.

Since then it has been completely rebuilt and returned to its original, dignified, Express blue and light cream colours. The chassis of another Ross/Helecs 'Rider Pram' (PUC 174) is owned by the Trust. The pair are the only known survivors although at least two Lewis-built 'Rider Prams' are extant.