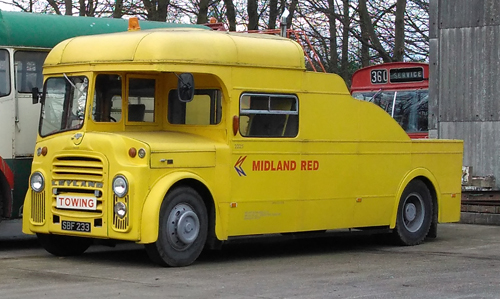 This vehicle entered service in January 1962 as a 64-seater double-decker bus with the legendary Staffordshire independent operator, Harper Brothers of Heath Hayes. Number 25 in the fleet, it quickly earned a reputation for speed! Leyland PD2 experts will appreciate that the PD2/28 is a rare variant (originally Midland Red front end, air brakes, synchromesh gearbox, and 7 feet 6 inches wide - narrow by this time. At some point in its bus career, a PD2A front grille was grafted onto its original bonnet).

Harpers sold out to Midland Red with effect from September 1974. Numbered 2225 by its new owners, it was soon repainted in National Bus Company poppy red. It became a training bus for potential new drivers from February 1976 (soon acquiring its first coat of 'service vehicle' yellow) until July 1981. Three months later it was rebuilt as a towing lorry, by which time the old company had been split and 2225 found itself in the Midland Red North fleet, later part of Arriva.

Chris Hatton rescued 2225 from a scrapyard in May 2002. It had been through a number of owners by this time, including partial stripping by itinerants, and was in a very poor state. Kevin Hill took on the job in July 2002 and returned it to fine condition within two years. It has been restored to the livery carried upon first conversion to a towing lorry.